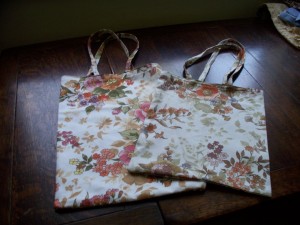 Here are the reasons that we won’t buy plastic bags for you to take your veg home in! It is not because we are too mean! Please bring a re-usable bag with you or buy one from us, we use the proceeds to support our project.

Plastic Bag Production:
Plastic bags are made from petroleum products and natural gas, plastic bags utilise non-renewable resources, ultimately helping to drive up fuel prices. 0.2% of the world’s oil is used to make plastic bags – about 60 million barrels, worth about £3bn. Most plastic bags come from China, India, Thailand and Malaysia, logos are applied in the Asian factories and then the bags are shipped to the UK, using even more fuel to get them here. The average bag travels about 8000 miles!

Use:
On average each person in the UK collects about 216 plastic bags a year! Each bag is used for an average of 20minutes before it is thrown away.
According to the Wall Street Journal, only 1% of plastic bags are recycled world-wide; the rest are left to live on indefinitely in landfills. A third of us use plastic bags as bin liners. Another third re-use them for shopping. But eventually, more than 98% end up in landfill and about 200million litter the countryside.
Recycling:
Only 5% of us recycle bags. UK facilities are so limited that about 100 million bags a year are shipped back to China. There, they are shredded, melted and turned into plastic beads. The dyes and inks in bags do not make them harder to recycle – but they turn the plastic grey or black. The beads can be used to make new bags. Plastic bags are cheaper than paper bags, but may be worse for the environment.

Disposal:
A plastic shopping bag can take anywhere from 15 to 1000 years to decompose in a landfill site. Plastic bags don’t biodegrade, but are at risk for photo degradation, light exposure dissolving them into toxic polymer particles. Most often, when this happens, it happens in the ocean. According to the British Antarctic Survey, discarded plastic bags have been found as far north as the Arctic Circle and as far south as The Falkland Islands. An estimated one million birds and 100,000 turtles and other sea animals die of starvation each year after ingesting discarded plastic bags which block their digestive tracks. Plastic bags can choke or poison fish, animals and birds, with marine wildlife particularly vulnerable. As a study cited by the Government explains, “when seabirds, sea mammals or fish ingest plastic particles, blocking of the gut is likely to harm or even kill the organism”. The RSPB warns that birds can mistake the bags for fish or nesting materials. If their legs or heads become entangled, it can prove fatal. In the oceans, plastic bags and other waste kill a million sea birds and 100,000 animals such as whales, dolphins, turtles and seals, each year. Once the animal’s body has rotted, the bag is released back into the sea, to kill again and again.Discarded plastic bags are, in the Department for Environment, Food and Rural Affairs’s words, “an iconic symbol of waste”. Billions of bags are used by shoppers in the UK each year and “far too many of these bags made their way onto the streets and into the countryside as unsightly litter”. Littered carrier bags cost taxpayers in England about £10 million a year in clean-up costs, Defra says.

Paper bags aren’t much better:
The United States cuts down 14 million trees per year to make paper shopping bags. It requires 13% more energy to produce one single paper bag than to produce two plastic bags. Made with chemicals processed at high temperatures, paper bag production releases many toxins into the atmosphere at much the same rate as plastic production. Paper bags weigh nearly ten times their counterparts in plastic, requiring more fuel to ship them out to stores. Despite their high recyclability factor, research shows that only 20% of paper bags end up recycled while the rest share a fate with their plastic brethren. 18 In landfills, paper bags produce over twice as much atmospheric waste as plastic, making them questionable at best as the superior choice for the environment.

Re-usable Bags:
The average reusable bag has the lifespan of over seven hundred disposable plastic bags. Over a lifetime, use of reusable bags by just one person would save over 22,000 plastic bags. So please bring a re-usable bag with you or buy one from us!

This entry was posted in Uncategorized. Bookmark the permalink.